What else does one do on a rainy Saturday than work on some long, long, LONG overdue website updates?

Here, a collection of the two-year-old maiden winners I covered at Saratoga for Brisnet/TwinSpires. Here’s hoping we’ll hear more from these babies…

“This was a special win for us,” said owner Dominic Fuda, choked up. “It was Brian that made the call to run here.”

“[My parents have] been big supporters of mine,” Chad Brown said. “They got me into this, taking me to the picnic area many years ago. They’ve really been a mainstay every day of the meet here, being with me and being around my staff. We’re all just a big family and they are very excited as well.”

“I can’t even describe it,” marveled Merjan, watching the replay. “My first win. At Saratoga, with a two-year-old that Mark picked out and bought.”

“She identified herself as potentially being special about a month ago, when we really let her stretch her legs out and see what she had,” said Brown. “We were having trouble finding partners for her to work with.”

Exercise rider and assistant trainer Danny Ramsey on Cairo Cat: “He’s nice. He’s smooth. He’s aggressive on the track. That’s all you can ask for in a baby.”

Gary Contessa on Sippican Harbor’s maiden win: “Whatever she does, she does unbelievable.”

“She’s always been a really classy filly to work around and had a tremendous attitude to her training and to life in general,” Nick de Meric. “She’s very sweet with people and as you like to see in these young fillies, she’s easy on herself. She eats well and she rests when she’s supposed to, which makes everything so much easier.”

“I trained Mucho’s mother and I trained a half-sister to him,” said Mott, “so it’s gratifying to have the family.”

“Dream Baby Dream racing manager John Cilia: “To win a maiden at Saratoga, that’s a big thing in racing. It’s been a while since we’ve been in the winner’s circle, so this is great.”

“Last season we had I don’t know how many seconds we had,” said Oxley. “We couldn’t get a win. It’s a nice way to start the meet.”

Seanow owned and bred by Wertheimer and Frère; trained by Todd Pletcher; ridden by John Velazquez. 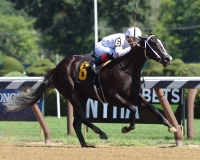 “She is who we planned on running in the first maiden,” Asmussen said. “She wasn’t a secret.”