#1 Family Biz (30-1): Ginormous longshot ran in place when fourth in the local Jimmy Winkfield last month going 7 furlongs, though his best lifetime run was a course and distance third in the Jerome on New Year’s Day, so it’s not like Barker doesn’t have a right to run here. Son of Fed Biz has a stalking/closing gear in a race with a ton of speed, which will help, but his lack of graded stakes kind of talent won’t; tough to tout.

#2 Knicks Go (20-1): GI-winning 2-year-old parlayed that Keeneland score in the Breeders’ Futurity into a second-place finish in the BC Juvenile at Churchill Downs, though little has gone right since for Colebrook, as he bombed when 11th in CD’s GII Kentucky Jockey Club to end his season and then again to kick off his campaign in the GIII Sam F. Davis at Tampa Bay Downs in February. Tactical son of Paynter could trip out nicely just off the speed, but considering his big win was at 70-1 and his Juvenile run 40-1, he looks mighty fluky, and that’s even before adding in his two most recent runs; needs a major form reversal. 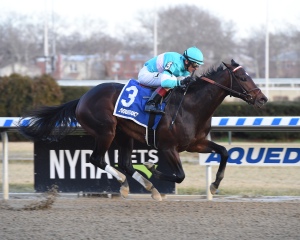 #3 Mind Control (6-1): One of the potential upsetters wired the Jerome in a rebound effort after a distant 7th in the Juvenile, but while he did pull clear late, he wasn’t all that visually impressive in what was a very weak field. Stay Thirsty homebred figures as part of the pace here, since his two biggest wins have come on the engine, which includes the GI Hopeful at Saratoga last September, so it will be unlikely Sacco tries a new tactic today. But that’s also the problem, as the heavy favorite has a ton of California speed and has never been behind a horse in two starts, and there’s plenty of other gas here, too, which only clouds the chances of a horse that gives the impression he’s second-tier to begin with; know him early, not so sure about late.

#4 Much Better (12-1): Baffert invader comes in from Santa Anita with some pure California speed, as he just set a wicked 44 3/5 half-mile when wiring an optional-claimer at Santa Anita last month, and it’s not like Smith to take any prisoners up front, so expect him to be winging early. Whether that allows him to stick around late is a big question mark, as this son of Pioneerof the Nile tired when third in the 1-mile GIII Sham two-back (though that was at two turns), especially since the odds-on favorite will be breathing down his neck the entire way; mixed signals here.

#5 Haikal (6-1): Winkfield winner sure likes to cut it close, as he lost by a neck on debut before breaking his maiden and earning his stakes win by the same margin, though he gets a ton of bonus points here for being one of the few who can pass horses in the lane. Shadwell homebred son of Daaher has taken the predictable approach of McLaughlin runners, as he’s improved with each start, and if he builds off his last, he’s a legit candidate for the upset here. On paper he’s not good enough to beat the chalk next door, but if he does move forward, and if the favorite isn’t ready off the long break, gets fried by the pace, or doesn’t like a cross-country ship, well, stranger things have certainly happened; the main danger. 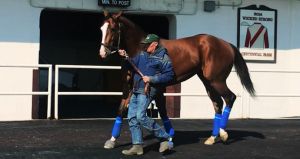 #6 Instagrand (1-1): The most talented 2yo of 2018 did something quite out of the ordinary after winning his first two starts, including the GII Best Pal at Del Mar, by over 10 each, in that he was stopped on in late August as a happy and healthy horse, as owner Best said he’d like to have a horse to race at 4 and 5 (yes, you read that correctly). The move perplexed Hollendorfer, but here we are, albeit across the country and some 2,800 miles from home, and judging by his AM trials, this son of Into Mischief hasn’t missed a beat, while giving new pilot Castellano a test drive last week. If there’s a worry, it’s obviously the layoff and the ship, and the fact that he hasn’t sat off a horse in either race, but if you watch those races last year, you get the impression this is a potential superstar, and no one else in this crew remotely resembles that description; imposing.

#7 Not That Brady (5-1): Talented New York-bred is another member of the speed brigade and showed he can swim in open waters last time, when a big second, beaten just a neck, in the local GIII Withers. Rodriguez wheels right back here, and cuts back too, as that big stakes run came at 1 1/8 miles and two turns, though he did romp over Empire breds over the track and distance twice in December. If this son of Big Brown can settle a bit early, he’d have a say late, and you know there’s a ton of foundation here, but this is a mighty tough ask, especially since he’s been on the lead in all of his four route starts; playing against.

#8 Tikhvin Flew (20-1): Expected stalker was a heavy favorite in the Winkfield and ran well to be third while making only his second start, though both runs to this date leave him well behind the main contenders here. Asmussen-trained son of Street Sense is bred to run on, though, and his style could play well here, and off just two lifetime starts, he’s got plenty of upside and room to grow. The price will be a ton better than it was last time as well, so while a win seems highly unlikely, the race flow might flatter his chances; can get a share.