#1 Roiland (12-1): Deep, deep closer passed some stragglers late in both the local GIII Lecomte and GII Risen Star, when he was third behind today’s heavy favorite War of Will, and is one of several in here that should appreciate the added ground he gets to work with here. Of course, this son of Successful Appeal didn’t make a dent in either start for Amoss, and there are some solid new shooters today as well, so while he’ll run on again late, it’s tough to think he’ll better his finish last time, especially with what looks like a modest pace; using underneath, if at all.

#2 Lemniscate (15-1): Projected inside speed steps way up here for McPeek, as he enters off a wire-to-wire win over the turf at Gulfstream Park last time, though he did run fast when sprinting on the dirt two back. Son of Exchange Rate is bred for this, and we know these 3-year-olds can get good overnight, but this seems like one heck of a reach; pop and stop seems likely.

#3 Limonite (20-1): Yet another deep closer that exits the Risen Star, and while this son of Lemon Drop Kid was fifth that day, he did have trouble and was making his first start since running third in Churchill Downs’ GII Kentucky Jockey Club to end his 2-year-old season in November, so you’re allowed to think he moves forward here. The first of two for Asmussen might take some sneaky money today, especially with José Ortiz riding, but the race flow doesn’t suit him, and, up to this point he’s just not fast enough on paper or the track to make a dent against this kind; midpack finish seems likely.

#4 Sueno (8-1): Improving sort came from California and almost upset Oakland Park’s GIII Southwest last month, when he closed late to be second, which built upon a good second to the accomplished Gunmetal Gray in Santa Anita’s GIII Sham in January. Son of Atreides is another bargain purchase by Desormeaux, who seems to show up every year with one or two 3yos that run well wherever they’re sent. Stalker meets a tougher field today, but he’ll trip out nicely off what looks like a soft pace, and his last says he’s going in the right direction, so you could do worse than landing here; very playable.

#5 By My Standards (12-1): Impressive local MSW winner takes a big rise in class, as Calhoun tries to see where this son of Goldencents fits with stakes-caliber foes. Stalker is another who could trip out here, and that 4 1/4-length win last time says he’s a name to remember, but this seems like a mighty big ask right now; not seeing it.

War Of Will and Tyler Gaffalione winning the Lecomte in January. Hodges Photography/Brit Benson

#6 War of Will (6-5): Deserving heavy favorite is easily on top of the local mountain off dominant wins in both the Lecomte and Risen Star, and will look to score the Louisiana prep hat trick for Casse. Tactical son of War Front should be sitting off the speed while waiting for first run, much as he did in two local victories, which advanced his record to 3-for-3 over dirt. If there’s a rub, it’s that he hasn’t run overly fast, which could leave him vulnerable if someone jumps up with a lifetime best run, and he’ll be a short price, too, but he’s done nothing so far to suggest he’s not up to this challenge either; rock solid.

#7 Mr. Money (20-1): BC Juvenile fourth-place finisher at CD was a meek seventh in the Risen Star, in what was his first start of the year, so he could improve. And it is a good sign that Calhoun forges on, as this son of Tiznow could improve second off the layoff, but he still seems a cut below, at least at this point of his development; tough to tout.

#8 Country House (9-2): Lightly-raced son of Lookin At Lucky was the wise-guy horse in the Risen Star and lived up to the billing, rallying late to be second, though ‘Will was in another zip code at the line. Stretch-runner bridged the gap from maiden winner to stakes foes last time, and he’s allowed to improve again for Mott, who surprisingly has an army of 3yos, so there’s a lot of reason for optimism here. There are issues, though, too, as he lacks positional speed, will be overbet, and is another that may be compromised by the lack of pace, so he might not have the chance the toteboard tells you he does; making him prove it on top. 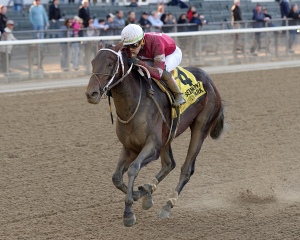 #9 Bankit (20-1): Asmussen’s second is a New York-bred still looking for his first win against open foes, and that middling fifth in the Southwest last time won’t cut it here. Son of Central Banker is another that wants to rally late, and there are a few in that crowded car better than him, so unless he enjoys an unexpected major form reversal, he’s overmatched here; Mike Lee, here we come.

#10 Spinoff (8-1): Pletcher invader is one of the last bullets from the gun of a trainer who has come up relatively empty on the Triple Crown Trail this year, though this speedy son of Hard Spun could right the ship in a hurry with a big run today. Homebred sure looked good winning a two-turn optional-claimer by the length of the stretch at Tampa Bay Downs off a long layoff, much as this barn’s Derby hero Always Dreaming did when breaking his maiden at two turns on the left coast, so don’t be fooled into thinking that this is a second-tier kind of runner. And if anyone is to benefit by what looks like a soft pace, it’s this dude, who pressed hot splits last time and still ran off, so with a positive race flow and a ton of upside, not to mention a nice price, he might be the right fresh new face here; upset special.

#11 Hog Creek Hustle (12-1): Stretch-runner was fourth in the Risen Star and followed the path of ‘House and Roiland in that he rallied way too late without threatening ‘Will. Overanalyze colt is bred to run on and seems to be going in the right direction for Foley, though he’s another stepping up here that is at the mercy of the pace; fringe player.