There’s a lot of summer and a lot of racing left, but the early highlight for me came in a Sunday afternoon optional claimer, when T Loves a Fight closed like the fighter he is to win by three-quarters of a length. His young owner/trainer, Orlando Noda, has trained horses to just 16 starts; all three of his lifetime wins have come with T Loves a Fight.

It’s Monday morning and while I miss the quiet Mondays at the track, it’s a beautiful day and plenty going on in town away from the track. We’re on to week 2…

Hay, Oats, and Spaghetti at the Racing Museum. This annual event raises funds for the Museum, Thoroughbred Retirement Foundation, Old Friends at Cabin Creek, ReRun, New Vocations Racehorse Adoption Program, and Equine Advocates. The event is catered by Mama Mia’s, and you can dance off all that spaghetti to live music. Cost: $125 per person, or $150 per person including a one-year membership to the Museum. 6 – 10 pm. Call 518 603 0346 or e-mail events@mamamiassaratoga.com for more information; tickets here. 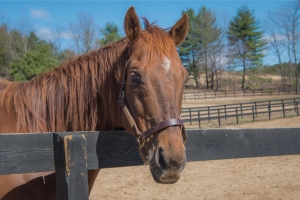 In the community booth, located outside the jockeys’ silks room: Saratoga WarHorse Foundation

Backstretch Babies at the Racing Museum. For children two years old and younger, this weekly program includes a short story or activity and free play with “sensory-friendly” toys. 10 – 11 am. Free with adult paid admission (Weekly until August 28)

Low Roller handicapping challenge: Practice your handicapping skills in this contest with a $40 buy-in, with $30 going towards your live bankroll and $10 going into the prize pool.  Registration begins at 11 a.m. near the Fourstardave Sports Bar. (Every Thursday and Sunday)

Taste NY: Wine & Spirits will offer samples of wine and spirits from New York State wineries and distilleries. Live music will accompany the tasting each Thursday from noon to 5 p.m. in the Saratoga Pavilion. Cost: $5 for five samples. (Weekly)

Don Julio Thursday: Sample drinks that include Don Julio tequila from 3 to 5 p.m. outside the entrance to The Stretch at the far end of the second floor of the grandstand. (Weekly)

In the community booth, located outside the jockeys’ silks room: Yaddo Gardens

Celebrate 30 years of Backstretch Employee Service Team.  BEST will honor long-time supporter Tom Durkin, NYRA’s retired race course announcer among his many other accomplishments, with a breakfast buffet on the porch at Saratoga Race Course. Tickets are $50. 8 am. BEST provides a variety of services, including medical, mental health, and substance abuse programming, for workers on the backstretch of the New York Racing Association. 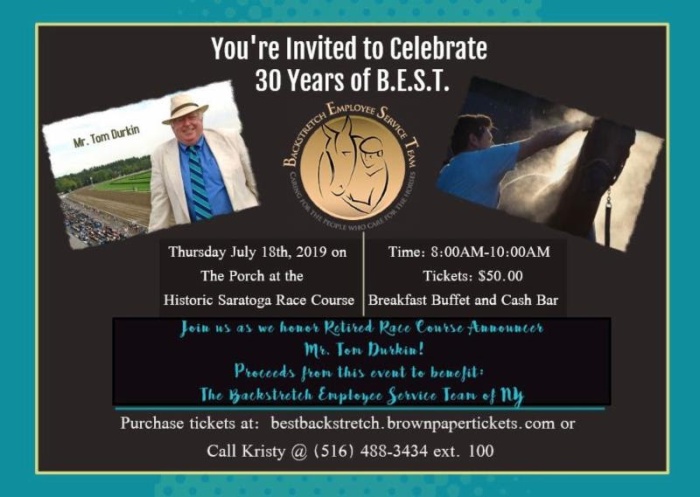 “Create Your Own Horse” at the Racing Museum. For children ages 3 to 8, this program explores horses’ colors and markings, along with how to name a racehorse. 10 am – noon. Free with paid adult admission.

RACING CANCELLED DUE TO EXTREME HEAT

Low Roller handicapping challenge: Practice your handicapping skills in this contest with a $40 buy-in, with $30 going towards your live bankroll and $10 going into the prize pool. Registration begins at 11 a.m. near the Fourstardave Sports Bar. (Every Thursday and Sunday)

“Brunch and Bubbly” at The Rail at the 1863 Club: Check out the new 1863 Club and the ground-level The Rail hospitality space. Tickets are $75 and include brunch and mimosas; more details if they become available. Make reservations at 844-NYRA-TIX.

In the community booth by the jockeys’ silks room:  The Music Studio

Sunday Stroll: Saratoga’s Past in Greenridge Cemetery. Join the Saratoga Springs Preservation Foundation for its weekly Sunday Stroll. This week, Jan Klassovity will talk about the unusual crypts and history of some of Saratoga’s prominent citizens. Buried here are James Marvin, instrumental in the early days of Saratoga Race Course, and Hall of Fame trainer Sam Hildreth. The tour begins at 10:30 am and lasts approximately 90 minutes. Meet at the Sackett Gates of the cemetery on Lincoln Avenue and wear comfortable shoes. $5 for SSPF members, $8 for non-members. Tours are rain or shine and tickets can be purchased here, in advance or on the day of the tour.

Zippy Chippy Day at Old Friends at Cabin Creek. Meet the lovable loser—winless in 100 races!—Zippy Chippy. Every Tuesday, the Adelphi Hotel food truck will sell burgers, sushi, smoothies, and other food items from 11 am – 1 pm. Enjoy a gorgeous setting, lunch, and of course the horses. Equine residents at Cabin Creek include Commentator, Be Bullish, Will’s Way, Cool N Collective, and Cosmonaut. Tours are available from 9 am to 1 pm.