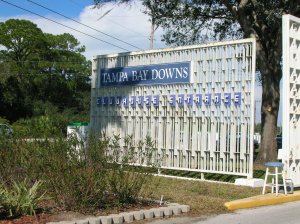 I annually travel to southwest Florida to visit my aunt; while I log plenty of beach/pool hours, I also generally vary the daily lazy activity by taking in some sort of sporting event, often the Nasdaq tennis tournament on Key Biscayne (which I highly recommend) or a hockey game in Sunrise, home of the Panthers (which I don’t). In March ’06 and ’07, I went to Gulfstream, the latter for Scat Daddy’s Florida Derby.
This time, I traveled southward through Florida on I-75 and northward partially on state road 301, both of which took me past dozens of gorgeous horse farms: acres of emerald pasture, traditional white picket fences, training tracks visible from the highway. Swiveling my head east to west, I don’t know how I avoided a major accident, and I was tempted to detour to get a closer look….but on the way down, the beach was calling, and on the way home, something far less pleasant—duty—did the same.
I’m not usually in Florida at this time of year, and I was tempted to head east for Gulfstream’s opening day, but I opted instead for novelty, and headed north for Tampa Bay Downs, about which I’ve heard nothing but good things, and it didn’t disappoint. It’s a lovely, lovely little track. The scale is charmingly intimate, and I felt closer to the track and the horses than anywhere else I’ve been; at times, I felt almost as if I were at a fair instead of a major track.
I entered through the clubhouse, the ground floor of which is a simulcaster’s paradise. A huge bank of televisions faced the track, opposite dozens of individual carrels. Facing one way, you see dozens of screens of live racing; turn 180 degrees, and you face the finish line.
One floor up is a viewing/dining/bar area. Rows of stadium seating face the track; above the seats is a row of televisions showing racing from other tracks. The bar was well-stocked with a variety of good liquors; the food was typical track fare: pretzels, hot dogs, the like.
The third floor of the clubhouse is a restaurant; didn’t check out the menu, but it looked like a great place to while away an afternoon. The top two floors are suffused with natural light, with terrific sight lines to the track.
The second floor of the grandstand contains plenty of boxes and outdoor seating; inside is a sizable poker room, which was quite active on the Friday afternoon that I visited. Its windows were blacked out, and walking in from the Florida sunshine was like going into a sensory deprivation chamber, similar to the simulcasting room on the ground floor of the clubhouse. Neither showed any significant interest in live racing.
Florida schools were still on holiday break while I was there, and there were a number of families and kids at the track: little kids with their parents, teenagers out for the day. It reminded me a little of Saratoga that way; Tampa Bay Downs seems like a place people go to hang out, not just to bet.

A few racing elements caught my attention, or in one case, eluded it. The seven-furlong chute is so far off the turn that you can’t see the start; it’s hidden back behind a copse of trees, and you can’t see the horses break. In the second race, Bobbie’s The Best was, going off at .40 – 1, winning by four and a quarter after stalking the page and going so wide around the final turn that I thought she’d end up in the paddock. In the sixth race, Quill Out went to the front, then stopped; jockey José Lopez pulled him up, and hung out with him on the far turn, waiting until the horses circled back after the race, then jogged him around the track to the finish line. He certainly didn’t seem injured, and no vet/ambulance came out to assist him; his trainer took his saddle off, and off he walked back to the barn. Bizarre.

The talk of the seventh race was Interceptor; literally, everywhere I walked, I overheard conversations about him. Bred in Great Britain, by Hector Protector out of Moorish Idol (Aragon), this eight-year-old horse last raced in July of 2005 at Del Mar. He began his career in England and is not what one would call heavily raced: twelve starts at age eight. Nonetheless, he was 9/2 on the morning line (third choice). He broke out of the gate before the start, losing his jockey, and took off for about a furlong before he was caught by an outrider; after a quick check, the starters loaded him back into the gate—rather surprisingly, given that the horse had a run before the race. Unsurprisingly, he finished last by about forty lengths.

I bet a few races and didn’t get anywhere; lots of chalky winners, with only two on a ten-race card paying double digits. The penultimate race featured one horse going off at 60 – 1 and another at 99 – 1; I resisted the temptation to do a $1 WP on each of them, and nearly choked as the 60 – 1 shot lost by a nose. I have never rooted so fervently for a horse to lose the bob as I did at that moment.
Tampa Bay Downs is a little like Saratoga, and a little like Monmouth; it feels like a summer recreation track in a way that polished, artificial Gulfstream doesn’t. It’s comfortable and clean, and there’s something pleasingly modest about it, in direct contrast to its grandiose neighbor to the southeast. I loved it and would go back in a second; the racing on the other side of Florida is undoubtedly superior, but the experience on the Gulfside track beats it any day.

8 thoughts on “A Trip to Tampa Bay Downs”