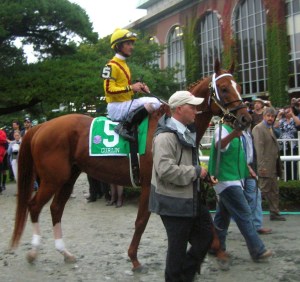 The way Curlin’s imminent departure from the racing stage was treated yesterday bears some resemblance to his racing career: we knew he was important, but he never quite got the attention he deserved.

The Sunday morning print edition of the New York Times carried a good-sized story about Jess Jackson’s decision to begin Curlin’s stud career in 2009; I became aware of the story after seeing a link to the electronic version of the Times posted by Kevin Stafford of The Aspiring Horseplayer on Facebook. As Valerie Grash of Foolish Pleasure noted in a comment, by mid-afternoon yesterday, the Blood-Horse had posted an Associated Press story; Thoroughbred Times and the Daily Racing Form had both posted stories around 1:00 pm. As a firm believer in the non-24 hour news/work cycle, I find it more curious than blameworthy that the Times had the story first, but perhaps Jackson talked to Bill Finley before he talked to anyone else, and that’s how it happened. Without knowing how the news was released, I’m not casting aspersions on the racing publications that their stories got up later on Sunday than the Times story did.

But it does seem a fitting, if somewhat backwards, way to deal with the end of this colt’s career. The racing press and racing fans embraced Curlin, and gave him plenty of attention and column inches over the last eighteen months, the rest of the world—not so much. On Sunday, the general press reported the news of his retirement, likely to an audience not much interested in it.

For whatever reason, Curlin never attracted the kind of scrutiny or excited the kind of admiration that his fellow Horse of the Year candidate Big Brown did. Even as writers and fans wrote gushingly of Curlin’s muscular, impressive physique, few raised the possibility of his racing on medication, despite his trainer’s long list of medication violations. And even as Curlin raced regularly through the year and moved closer to breaking Cigar’s money record, he could never bring fans to the track the way that Big Brown did.

None of this is meant to take away from Curlin’s accomplishments as a racehorse; though for some reason my and Curlin’s paths didn’t cross too often (I missed both his Woodward and his Man o’War), I was at the rail for both of his Gold Cup wins, each of which was thrilling: the first for the stretch duel with Lawyer Ron, the second for its historical significance. Only the most hardened horseplayer could have failed to be moved by Curlin’s walk to the winner’s circle on that muddy, dark afternoon at Belmont; it’s a shame that, despite a concerted PR effort, so few people showed up to see him.

I don’t know why the general public never caught on to Curlin, why he never fired folks’ imagination the way that Big Brown did, or why his winning was never attributed to anything except his talent. I don’t know anyone who ever saw him in person who wasn’t impressed, even awed by him; it was nice to think that he might have stuck around for another year, but it’s a surprise neither to hear that he won’t, nor that he leaves without the fanfare we might expect for a champion.