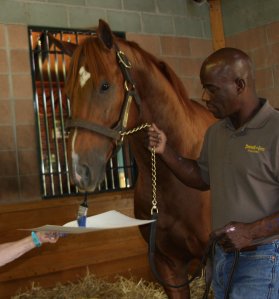 Artist Lawyer Ron at work in his studio

I heard recently from the good folks at ReRun, a non-profit Thoroughbred adoption program whose mission is to help ex-racehorses find a second career. As is the case with many charities/non-profits at this time of year, ReRun is launching a holiday fundraiser, this one an auction of equine art to begin November 23rd.
Not interested in pictures of horses, you say?
OK, then, what about pictures by horses?
Moneighs® are abstract, watercolor paintings created by horses and trademarked by ReRun, sold to raise funds for supporting the horses in its program. According to the information I got from ReRun, “ipi tombe” means “where are the girls?” in the Xhosa language, and for the first time, paintings by fillies and mares will be featured in this season’s auction.
Ipi Tombe, an international Thoroughbred champion, bred in Zimbabwe, is one of six females featured along with 24 male artists in the upcoming auction. Featured artists include: Zenyatta, Rags To Riches, Serena’s Song, A.P. Indy, Cigar, Da Hoss, Daytona, Distorted Humor, Dynaformer, First Down Dash, Flying Pidgeon, Funny Cide, Gato Del Sol, Golden Doc A, Ipi Tombe, Kona Gold, Lawyer Ron, Leroidesanimaux, Lethal Heat, Marquetry, Medaglia D’Oro, Ruhlmann, Runaway Dancer, Sharp Humor, Sky Mesa, Thunder Puddles, Tiznow, Value Plus, Western Dreamer, and Will’s Way.
According to artist assistant Mary Simons, some of the horses, such as Cigar, Kona Gold, and Lawyer Ron held the paintbrush; A.P. Indy, Funny Cide, Lawyer Ron, and Rags To Riches were the most “enthusiastic” to work with. Given the stories that we’ve heard about Rags To Riches, we can only hope that “enthusiastic” isn’t a euphemism! 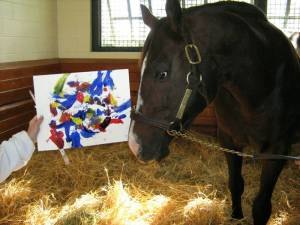 The official Moneigh page features photos of artists Smarty Jones, Point Given, and Gulch at work, and you’ll find the auction there beginning next Wednesday Sunday, November 23rd.

In other news: I may no longer be persona non grata at the Garden, as I finally got my first win of the season. It wasn’t pretty, but two points is two points… 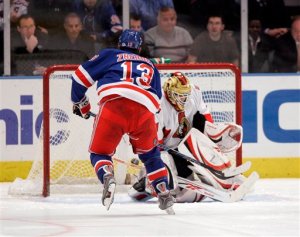