On June 18th of last year, two baby felines moved temporarily into my home.  They’d been found in a Brooklyn backyard, offspring of a feral mother, and at about a month old, they needed immediate foster care.  “No more than a week,” I warned as I accepted them from their rescuer.  “We have to find them a permanent home.  I can’t have four cats.”

Six days later, I got home from work in time to catch the eighth race from Belmont; Crazy Catlady was 12-1.  Inveterate hunch bettor and having already fallen in love with the foster kittens, I bet $2 to win, thinking, “If she wins, it’s a sign, right? A sign that I should keep them?”  1:25.26 and $27.40 later, I knew what it took me three more months to accept:  These kittens weren’t going anywhere.

Crazy Catlady is a five-year-old bay daughter of Freud and Lady Groush; she’s started 18 times with four wins (18-4-2-2).  That Belmont win last June was pretty terrific, as was a win at Saratoga last summer in a starter allowance.  She raced in the Hettinger Stakes last fall at Belmont, finishing last of seven, which sounds worse than it was, considering that she finished only a length and a half, two necks, and two noses behind the winner.  She races mostly in allowances, with occasional forays in state-bred stakes races.

Oddly, she frequently races against other cat horses; last May at Belmont, Acquired Cat was first; Crazy Catlady sixth; and Catty Madeline last.  Kitty Nip is another who more than once has shared the entry box with her.  We have nothing to say about Nehantic Kat.

Crazy Catlady generally takes the winter off, spending time at the farm to recover from her racing year.  She resumed training this year in March at Gulfstream; I caught up with her late that month, thanks to the kindness of her trainer Tim Hills and his assistant Michelle Bern, neither of whom, mercifully, made of fun of me for wanting to meet their horse.

Though she was quiet when I saw her, importunately seeking treats, I was cautioned that she can nip—what cat doesn’t?—and that I should stay on my guard.  That warning seemed completely unnecessary, as she was docile and friendly, accepting peppermints and carrots and attention with the equanimity of a placid and spoiled housecat.  She was due to remain in training until she came back to New York.

Not long after my visit, Crazy Catlady suffered a bit of a setback, and last month she went back to the farm for a brief recuperation before resuming training.  When she’s ready, she’ll be based at Belmont, taking on, I hope, state-bred foes once again, at Belmont and Saratoga.

It was pretty cool to cash that winning ticket on Crazy Catlady last June—there’s nothing like that exuberance when your horse makes its run and you know that you’re going to win.  The money from that ticket is long gone, likely spent on cat food or kitty litter, but far less ephemeral is the presence of Furlong and Imp, who celebrate their first birthday this month, pampered in Brooklyn, thanks to Crazy Catlady. 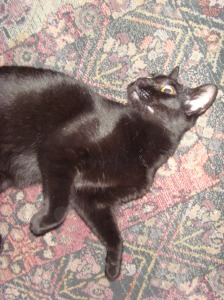 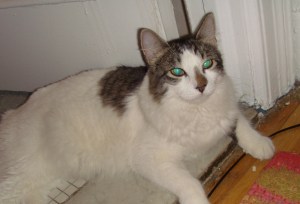