I first heard Paddy O’Prado’s name on August 5, 2009, the day that Saratoga Race Course was celebrating midsummer St. Patrick’s Day. The aptly named two-year-old, owned by Donegal Racing, was entered in the fourth race, a maiden special weight at a mile and a sixteenth on the turf. He finished second by a neck to Dean’s Kitten, racing, you should pardon the expression, a little green.

Paddy O’Prado never did win a maiden race, though he started in three of them. He broke his maiden in his fifth start, the Grade 3 Palm Beach Stakes at Gulfstream in March of 2010.  Dean’s Kitten was a couple of lengths back in second.

Last fall, for the Dale Romans diary for Thoroughbred Times, Romans told me that he’d always thought that Paddy O’Prado was one of his best horses, that he thought early on that he was good enough to be stakes caliber, so he didn’t mind entering him in stakes races as a maiden.

“He was training well in Florida,” said Romans last November of the spring of 2010, “and in March, there was a stakes race on the turf and a maiden race two days later. The stakes was coming up short, and it was longer than the maiden race, so we put him in the Palm Beach. To keep him out of trouble, we decided to send him.”

After a stint on the Derby trail off a second place finish in the 2010 Blue Grass, Paddy O’Prado returned to the grass in the Grade 2 Colonial Turf Cup at Colonial Downs. He went back to Churchill Downs before shipping to win the Grade 2 Virginia Derby and Grade 1 Secretariat.  In the fall, he came to Belmont for the Joe Hirsch Turf Classic Invitational (G1), in which he finished second, before returning to the Churchill dirt and finishing fifth in the Breeders’ Cup Classic. 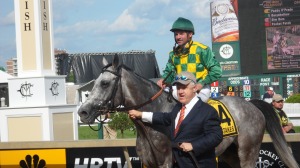 At Pimlico over the weekend, someone sagely told me that a reliable betting angle was to avoid the horse making his first start since the Breeders’ Cup. As if to prove that every rule needs an exception, Paddy O’Prado laughed in the face of the skeptics and cruised down the Pimlico turf course to win his first start since last November.  “The old Paddy is back,” said Romans in the winner’s circle.

For far too short a time, as it turns out, merely hours.

Yesterday, both Romans and owner Jerry Crawford were gracious in what must have been bitter, bitter disappointment.  “Very few horses retire on an up note, and he went out a winner,” said Crawford.  “To be disappointed in the end of the ride would be selfish.”

“I hate to see him leave the barn more personally than anything,” said Romans. “He’s great to be around.”

Both Romans and Crawford spoke about the colt’s charisma, his personality, what fun he was to be around.  “He was a ham, a performer, a fireball,” said Crawford.

And maybe that’s why I have, I discovered this evening, so many photos of him at so many tracks: Churchill, Colonial Downs, Pimlico, Gulfstream. Sweet in his stall, and friendly, he welcomed visitors and treats, and he seemed to love company.

On Saturday night, his front feet in tubs, in a stall next to Shackleford, who was getting a lot of attention, he was alert and inquisitive, nosing and nuzzling. One of the grooms looked at me and said, “He’s looking for candy.”

Fortunately, I had come prepared, and at the first sound of rustling, he reached his long neck out, gently taking the mint from my palm.  Romans said today that Paddy O’Prado was not in distress after the Dixie, and the horse’s appearance at the barn that night certainly supported that. He inhaled attention and peppermints in equal measure and with equal appreciation.

Said Crawford yesterday, “He let you look courage, grace, and fire right in the eye.

“He changed our lives for the better. That’s what horse racing can do.”

after winning the Colonial Turf Cup

One thought on “Paddy O’Prado”