On April 18, Justin Nicholson was on a train from Washington, D.C. to New York; his father, with whom he owns horses in AJ Suited Racing Stables, was scheduled for minor surgery the next day, and Nicholson wanted to be with him.

His phone rang and it was Jimmy Toner, trainer for AJ Suited’s horses and for those in 90 North Racing Stable, a partnership of which Nicholson is president. Toner has trained horses for Nicholson’s father for thirty years.

Three AJ Suited and two 90 North horses were shipping from Palm Meadows to Fair Hill; Nicholson had just purchased a barn there, and Toner would be splitting his time between Maryland and his Belmont park base. But in South Carolina, the van driver had swerved to avoid a car that had cut him off, and the horse trailer veered off the road and overturned.

“It was a hell of a night,” said Nicholson.  “We didn’t have any real immediate information. We knew the groom was OK, but we were getting only gradual bits of information, pieces of information through Jim or Kelly.”

Emergency personnel worked to cut the roof off the van, eventually freeing all six horses, Nicholson’s five and another, Orange County, owned by Anne Paulson and trained by Barclay Tagg. Orange County had to be euthanized as a result of his injuries. Empiricist, a full brother to 2009 G1 Personal Ensign winner Icon Project, was fine at first, but after colicking, he was brought to New Bolton, where an untreatable intestinal injury, caused by the accident, was discovered. He, too, was euthanized.

The other four horses were fine, aside from some abrasions and cuts. Much Rejoicing was the most seriously injured of the survivors, with what Nicholson described as “major open wounds” on her legs; he gives full credit to the facilities and staff at Fair Hill for her recovery, and she’s expected to run in a few weeks.

In 2010, Bold Hawk had made a comeback after a three-year layoff; third in the Hollywood Derby in November of 2007, his next start was in October 2010.

“That was one of the more masterful training jobs I’ve ever seen,” said Nicholson. “Jimmy helped him along and gave him the time. He was a horse we had a lot of faith in, and he had done well by us. We wanted to do well by him.”

So when, two weeks before a scheduled summer start, Bold Hawk came up with a minor injury, Nicholson retired him.  After some down time, he may be retrained as a stable pony.

“We want to do right by him,” said Nicholson, adding, “I want to keep an eye on him myself.”

Crying Lightening was, according to Nicholson, “already a nutcase,” requiring a lot of work mentally. “The accident didn’t change her much,” he said, beyond requiring some time off before racing again. She had come to the U.S. after racing in Europe and Dubai, with three wins from twelve starts. She raced here twice before the accident, running tenth and seventh; in four starts since, her best finish was a second at Monmouth in July. 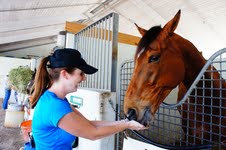 “He was one of the luckier ones,” acknowledged Nicholson. At least physically: the accident took a mental toll on him, too, and Nicholson described the ride to the track for his first race after the accident as “eventful.”  Some horses need to be gate-schooled; Candy Feat needed to be van-schooled.

Unraced at the time of the accident, Candy Feat (Hard Spun-Pedicure, by Mr. Prospector) was third in his first two starts, one at Delaware, one at Saratoga. He was seventh next out at Saratoga, and on September 27, he made his first trip to Belmont Park. Sent off at 9-1, he won by a half-length, chasing down the leader in the stretch.

“It felt like it took forever for him to get by,” said Nicholson, who couldn’t be at the race and watched it on TVG. “The analysts were talking about what a longshot he was, and my fiancée and I were saying, ‘Given all that he’s gone through, they don’t know what kind of a longshot they’re talking about.’ It wasn’t his odds that made him a longshot.”

Candy Feat will be in action again this Friday, in the eighth race; he’s 6-1 on the morning line.  Nicholson won’t be at Belmont to see it; he’ll be on a plane to Chicago, to watch AJ Suited’s Two Months Rent run in the Hawthorne Derby on Saturday.

“I’m hoping for Wi-Fi access on the flight so I can watch it,” he said, adding that some of the partners in AJ Suited will be there.

Describing the aftermath of the accident as “miraculous,” Nicholson said that 2012 has been a year of “pretty significant ups and downs for an operation of our size.”  He sings the praises of Jimmy Toner and his horsemanship; he is awed by the efforts of the people who worked for hours to free his horses; he can’t offer enough tributes to the staff at Fair Hill.

On that night on a train in April, he could hardly have imagined that one of those horses would be in the winner’s circle, and he is humbled by his good fortune.

“I’m grateful,” he said, “to everyone who made it happen.”

One thought on “Candy Feat Beats the Odds”