It’s Sunday morning at Belmont Park, and Jimmy Toner’s phone is acting up.

“I was watching the race last night and I got so excited I must have hit it or something,” he says with a rueful grin. “It stopped working right.”

“The race” was the G3 Hawthorne Derby, and Toner was so excited because his Two Months Rent won it, five years to the day after Toner won it with Bold Hawk. 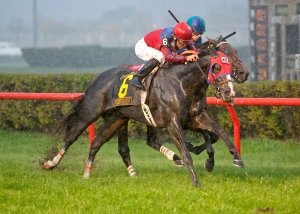 Mirth abounds on Sunday morning; for the Toner barn, it’s been a great weekend in a testing year. A few hours before Two Months Rent won his first graded stakes race, La Cloche, an older half-sister to Winter Memories, did the same thing in the G3 Athenia at Belmont Park.

“It’s nice to come in today,” he says. “Everybody’s upbeat and happy.”

That hasn’t always been the case this year. Toner’s year got off to a slow start in Florida, and then disaster struck as he moved his horses north in the spring.  A van carrying five of his horses and one of Barclay Tagg’s from Palm Meadows to Fair Hill overturned on I-95 in South Carolina; Tagg’s horse and one of Toner’s were euthanized as a result, while the others sustained relatively minor injuries. (More details on that story here.)

“The accident knocked the wind out of everybody,” said Toner. “The horses on the van were all ready to race. It was awful.”

But with two barns full of horses to take care of—one at Belmont Park, one at Fair Hill—Toner couldn’t dwell on it. His stable star, Winter Memories, was scheduled to run two weeks after the accident.

She won that day, in the G3 Beaugay at Belmont, and would go on to finish second in the G1 Just a Game at Belmont, and then to win her second G1 race, the Diana at Saratoga in July, a race that her mother, Memories of Silver, had won in 1998 for Toner.

“We had a good summer,” says Toner. “She wins the Diana and she’s at the peak of her career, the best race she had ever run in her life…”

He pauses, heaves an exaggerated sigh, and slumps his shoulders.

“And then she’s retired.”

Winter Memories sustained a bone bruise in her right front ankle, and while the injury wasn’t serious, she’d have needed the rest of the year off. Her owner, John Phillips of Phillips Racing Partnership, had planned to retire her at the end of 2012; instead, she was retired in August. Phillips, of historic Darby Dan, had bred Winter Memories; the filly’s family goes back five generations at the farm. Phillips also owns and bred La Cloche.

“So, OK, regroup,” Toner remembers feeling. “The rest of the Saratoga meet was just, get through it and come back to Belmont.”

Come back to Belmont they did, and before September was over, Candy Feat became the first horse from that terrible April van ride to win a race. The three-year-old is owned by AJ Suited Racing, the partnership of Justin Nicholson, his father Ronald, and some family friends.

“It took me a little bit to remember that he was one of the horses on the van,” admits Toner. “Then I stopped and I thought, that was awesome for him to come back.”

And if Toner characterizes a maiden special weight win as “awesome,” how would he describe a weekend in which he won two graded stakes?

While winning any race is worth celebrating, the wins in the Athenia and the Hawthorne Derby are particularly meaningful.

“We’ve managed to keep it going,” Toner says. “The horses that won yesterday and the people that we won them for—John Phillips and Darby Dan, all my best horses have come from there.

“And AJ Suited is Ronnie Nicholson. He’s been my client for 30 years.”

In Toner’s first winner of the Hawthorne Derby, Bold Hawk, the two families came together. Owned by the Nicholson family—now part of the 90 North partnership managed by Justin Nicholson, Ronald’s son—Bold Hawk was bred by Phillips. His sire, Silver Hawk, is the damsire of Winter Memories and La Cloche.

Bold Hawk was also one of the horses on the van that overturned.

“I was thinking about Bold Hawk when I sent Two Months Rent out there,” said Toner. “It was one of my biggest thrills, having him win the Hawthorne Derby. Then he ran third in the Hollywood Derby, and he didn’t run again for three years. We brought him back in 2010.”

Now eight, Bold  Hawk nearly made it back to the races after the accident, but a minor injury this summer led to his retirement.

“He’s turned out at a farm in Pennsylvania,” Toner said. “He’s such a neat old horse.  Some people were interested in him as a hunter, but we said, ‘Let’s keep him for ourselves.’”

On Sunday morning, Toner is still basking in the glow of the weekend, even as he talks to a farrier, tries to locate the owner of a missing phone (which, unlike his own, is working fine), and does an interview for Capital OTB upstate.

He’s busy, but he’s smiling broadly, and he says, in something of an understatement, “It was a good day. A good day.”

And then he adds, laughing, “And then my phone went out. I wanted to call everybody, and I couldn’t.”