I was standing on the apron at Keeneland on a recent, raw Sunday morning when my phone buzzed with a text message. I looked, and this face appeared. 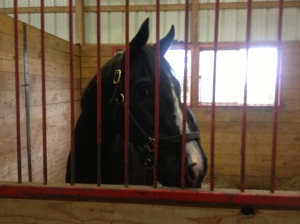 I’m not one for recognizing out-of-context equine faces, but that distinct, funny blaze, along with the sender’s name, clued even me in. But that wasn’t a Saratoga stall.

“Where is he?” I texted back immediately.

Street Life had been recuperating in Saratoga since rupturing a tendon in the Travers in August; the resulting instability in his left front leg had made transport impossible. The last time I’d seen him, on closing weekend, he hadn’t even been on his feet. 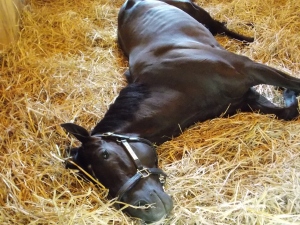 But as luck would have it, Street Life and I had arrived in Kentucky on the same weekend. His leg stable enough for travel, he’d shipped from Chad Brown’s barn at the Oklahoma to his owners’ Hidden Brook Farm.

Earlier updates had indicated that he was doing well in Saratoga. Though his injury was immediately diagnosed as career-ending, it did not appear to be life-threatening, and his owners had elected to forego surgery in the hope that the leg would heal on its own. He wore a cast and a wedge shoe, and he apparently was an ideal patient. An August 31 text from one of his owners read, “He’s happy. Eating. Such a generous horse. Great patient.”

He had been known for being something of a lazy worker, and not the most energetic of horses away from the track. While arguably not much of an asset for a racehorse, those characteristics served him well as he recovered.

Now in a roomy stall on a farm in Paris, Kentucky, the three-year-old son of Street Sense looks little different than he did last spring and summer. The cast is gone, replaced by bandages, and he inquisitively comes to greet visitors, nosing at the door of his stall when he hears peppermint wrappers. He’s mellow but bright, and appears to move with little discomfort.

It’s tempting to anthropomorphize when he walks to the back of the stall and gazes out the window; it’s easy to imagine wistfulness from the horse that finished fourth in the Belmont and won the Curlin at Saratoga, and who has now been confined to a stall for nearly two months.

He better get used to that view, though, as he’s still got about 60 days of stall rest ahead of him, according to Hidden Brook managing partner Sergio de Sousa, who is pleased with his progress so far.

“He’s sound and happy; he’s a good patient,” said de Sousa. “We’re probably going to x-ray him later this month, and we may lower the wedge on his foot. I imagine that he’s going to be fine, but we have to wait and see how he tolerates the shoeing changes.”

With injuries like this one, the threat of laminitis is always a concern; so far, Street Life has avoided it.

“At this point, his feet are doing well,” said de Sousa. “He’s bearing weight on both legs. If he were shifting or favoring one of them, it would be a problem.”

Seven months ago, a group of Hidden Brook partners flew up from Texas to see their colt run in the Broad Brush at Aqueduct, exulting when he won, allowing themselves to think Derby dreams.  He didn’t make it to Louisville, but he took them on quite a ride, including a trip to the winner’s circle at Saratoga for a stakes victory.  Their hopes for another picture in that winner’s circle ended in, if not heartbreak, disappointment and sadness.

For now, Street Life will stay at Hidden Brook, but his partners will soon begin seeking a stallion deal for him; there’s reportedly been interest in him, but, said Brothers, “We want to make sure he’s going to the right place.” 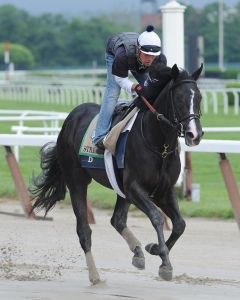 Prepping for the Belmont in June. Photo credit NYRA/Adam Coglianese

From March, my story on Street Life and his owners for Forbes.com.