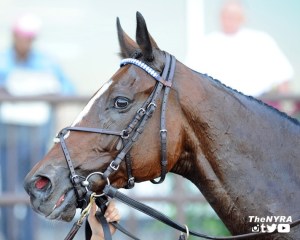 Ten-year-old Gustavian, an Eclipse Award finalist for champion steeplechase horse in 2013, was euthanized Sept. 16 because of complications from a paddock accident, said trainer Leslie Young.

A son of Giant’s Causeway out of grade I-winning mare Mossflower (Affirmed), Gustavian was typically given the summer off by Young, who trained the bay gelding for Magalen Bryant. He was injured in July while at Erika Lyman’s Maui Meadow Farm in West Chester, Pa.

“He was fooling around in his paddock and he ran into the fencepost with his shoulder,” said Young, whose husband Paddy was Gustavian’s regular rider. “He broke his humerus, but it wasn’t displaced, so we brought him to New Bolton. The fracture healed and he didn’t founder, and he was a couple of weeks away from being able to come home when the fetlock in his opposite leg started to drop off. He was in a Kimzey support and he started not wanting to get up; he wasn’t helping himself, and he wasn’t as bright as he once was. We tried everything.”

Continue reading at The Blood-Horse…