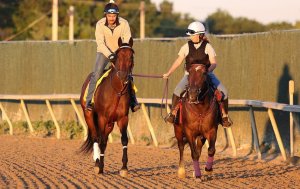 On Saturday afternoon at a little racetrack just outside Philadelphia, the top three finishers from this year’s Kentucky Derby will meet, for the third time this year.

In some racing circles, Parx Racing — the name of that little track — is more often derided than praised, not least of all for the name it was given in 2010 after 26 years of being Philadelphia Park and, before that, a decade of being Keystone Racetrack.

Parx — with its eye-catching red and orange logo, reflecting the color scheme of the casino that took up residence at the track in 2006 — can be viewed as a symbol of all that is bad about U.S. racing model: a small track that races year-round (or close to it), with low handle, few graded stakes, and purses fueled by casino revenue, a track that might not survive if the casino’s license didn’t depend on its existence.

Yet, over the last six years, Parx has transformed its flagship race, the Pennsylvania Derby, from a modest late-summer contest for second- or third-tier horses into a marquee event that attracts nationwide attention.