#1 Ayacara (GB) (8-1): Son of Violence goes for the Desormeaux brothers and makes his first start on the dirt since a distant fourth behind Bold d’Oro’s freakish effort in the track and distance GI FrontRunner in October, and while he was beaten 13 3/4 lengths, the figure he earned that day puts him in the mix with these. It’s a little odd that he’s been on the Tapeta up at Golden Gate and the turf here since, but he did draw well and should be running on late, though the pace doesn’t look too hot in here, which will hurt his chances; siding against.

#2 Pepe Tono (6-1): Improving son of Bodemeister stretched out to two turns and rolled home last time to break his maiden locally in just his second start and looks like a real comer for Garcia after that sharp late move. Facing winners is never easy, and he could be at the mercy of the pace today, but anyone who saw that run last time knows he’s on the improve, and the price will be right, too, so you better give him a look right back; can’t fault anyone landing here.

#3 Dark Vader (10-1): Tactical longshot was up just in time to win a weak MSW at Los Alamitos Race Course when last seen in December and really steps up today, though this will likely rank as the weakest of the local Derby preps this meet. Eurton doesn’t usually run them where they can’t compete, and they didn’t pay $150k for a son of $7.5k sire Tale of Ekati if they didn’t like what they saw, but at this point in time, even though he should trip out nicely, this seems like a real reach; can’t endorse.

#4 Lombo (5-1): The speed pressed the issue early, then drew off late to break his maiden sprinting last time over the track, and there’s little doubt he’s on a send mission today with the hopes of gutting this field on the front end. Dad Graydar was a fragile one but had a ton of talent and resolve going two turns, so this trip is likely within his scope, but the fact that Pender throws him right back in here just two weeks off that maiden win seems like an awful big ask; know him early, not sure about late.

#5 Shivermetimbers (7-2): Heavy hitter seems the one to beat after finishing fourth with trouble yet still within shouting distance of McKinzie, who is regarded as Baffert’s best and one of the leaders of the Derby ranks at this point. Son of Shanghai Bobby also gets some bonus points as he’s got a high cruising speed that will allow him to be placed close to the pace and get first run off the far turn, and he’s run fast in every start, not to mention that he beat ML favorite Peace two-back. Dangerous runner has plenty of seasoning, goes for a Hollendorfer barn that just keeps on keeping on ,and seems poised to break through over what looks like a mixed bag; tepid call. 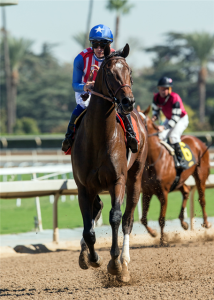 #6 Inscom (6-1): Turf runner has only tried dirt once, and that was a no-show sixth on debut in September at LRC, though he was 9-10 that day and had a tough trip, so you can be a bit forgiving. The worry is that Callaghan never went back to the well and immediately sought out the grass, and while this son of Distorted Humor has run well and just missed in a local minor stakes last time, they paid $850k for him, and the way to recoup that big investment is to run on the real stuff and rack up some black type in graded races. So, point being, there are some mixed signals here, though there’s obviously a lot of talent here, too; demand fair value if he’s for you. 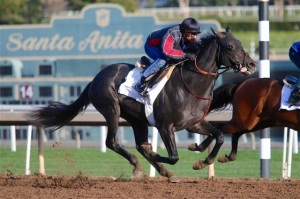 #7 Peace (3-1): The aforementioned chalk probably won’t go favored, as he’s already lost to ‘Timbers (albeit by a half-length), and his maiden win last time was slow on paper, though it’s tough to knock a horse for winning. The odd thing is that Mandella immediately throws on the blinkers, and while it’s never wise to question a Hall of Fame trainer (and horseman), the hood could have him a bit keyed up early and chasing the sprint speed of Lombo, which could hurt his chances late. The second son of Violence in here has some big form, and it’s worth noting he was second to another Baffert hotshot Mourinho on debut, while beating Instilled Regard, who ventured to Fair Grounds to annex their GIII Lecomte last month for Hollendorfer, but there are some hurdles to get over today; willing to make him prove it on top.

#8 Regulate (8-1): Rare Derby prep longshot from Baffert was heavily favored over ‘Tono in the aforementioned MSW last month but didn’t run an inch while finishing sixth, almost 15 lengths behind. It’s not like this barn to run a maiden in a stakes like this (American Pharoah in the GI Del Mar Futurity does come to mind), so maybe that run was simply an aberration, and he was beaten just a half-length by Peace in his MSW, so if you play the Kevin Bacon Game, he’s in the ballpark. Dad Quality Road was obviously a star, and dig a bit on the female side and you’ll find that his dam Modulate is a granddaughter of the immortal Toussaud, who dropped Empire Maker, Chester Honest and Honest Lady, among others, though this colt has a long ways to go to add to that legacy; for Baffert fans.

#9 Blame the Rider (15-1): Fellow maiden was third to ‘Tono, beaten 2 3/4 lengths, though he does seem to be progressing for O’Neill, if nothing else. That was also this son of Jimmy Creed’s first two-turn start, so he could move forward again, which is exactly what he needs to do to get even a minor award; needs softer to threaten.