#1 Extra Hope (6-1): The first of four Santa Anita invaders impressed in his seasonal debut, when he pressed a hot pace in an optional-claimer over a sloppy track and kicked clear late, in what was the perfect return off what was a very solid 2-year-old campaign for Mandella. Son of Shanghai Bobby drew well and will save all the ground here, and figures to be just off what looks like an honest pace, but one that won’t be too heated up front, either. The price will be right here too, though he does have eight lengths to make up on heavy favorite Improbable, who dusted him easily when this colt was third in the GI Los Alamitos Futurity in December, so a win might be too much to ask; exotics contender.

#2 Long Range Toddy (10-1): Stalker is one of two in here for Asmussen and proved his worth when third in the local GIII Southwest last month, though that race was won by a huge longshot, so the quality of it can definitely be questioned. Homebred son of Will Take Charge won the pricey Springboard Mile at Remington Park last year and has a running style that will allow him to sit a perfect trip today, and he’s another that drew well, too. The problem is that he appears stuck in neutral on figures, and none of what he’s done so far will scare the big favorite, so he’ll be hard-pressed to beat that Southwest run; underneath, if at all.

#3 Corruze (30-1): Oddly-spotted Fair Grounds-based runner has run twice on turf this year, and his lone dirt start was a no-show sixth (albeit in the slop) in an AOC at Churchill Downs last November, so he figures as one of the longest shots in here. As a son of Into Mischief he’s bred to handle the dirt, but Hartman has had a really rough go of it at the meet, and this isn’t the way to turn things around; next.

#4 Easy Shot (15-1): Stretch-runner rallied mildly to be third in SA’s GIII Robert Lewis last month, behind one of Baffert’s studs Mucho Gusto, though he now catches an even tougher foe in Improbable, so it’s going to be tough to improve on that finish. Desormeaux has done a good job over the last few years with these types, and this son of Trappe Shot fits the mold of one of his working-class heroes, so don’t be surprised if he outruns his odds, as the rest of these aren’t all that much. His running style figures to help, too, as those who want to be involved early will have to deal with the heavy favorite, while this colt will be sitting back and waiting to take advantage; expecting him to get a share.

#5 Proud Nation (50-1): Huge longshot is also the lone maiden in the field, and while, as a son of Tapit, he’s bred to be something, neither Asmussen or new trainer Sharp have been able to figure out what exactly that is in three starts, and this isn’t the spot to try and find it, either; get home safely.

#6 Ninth Street (50-1): Asmussen’s second was 104-1 in the Southwest and ran a distant ninth, and that was a weak race, so what he’s doing here, with Derby favorite Improbable lined up, is anyone’s guess, which makes this son of Street Boss an easy toss; coming to a N2X near you.

#7 Classy John (15-1): Louisiana-bred has made a nice living pressing the pace in his home state while winning a pair of restricted stakes for Stewart, though he now steps way out and tests the big boys today. Expect this son of Songandaprayer to be part of the early proceedings, and he has shown some fight in his wins, but that’s probably not going to matter much today when the real running begins; in too deep.

#8 Galilean (3-1): California-bred son of Uncle Mo gives Hollendorfer and West Point a chance at a big day, as they will also start Gunmetal Gray in the second division, and both have shown plenty of talent in the afternoon. Of course, this colt has done it in the state-bred ranks and will now test open foes today, so he’s a lot like ‘John next door, in that he’s got some serious class questions to answer. The good news is that he’s dominated in both his two-turn starts, which includes a 4 1/2-length win in the Cal Cup Derby at SA last month, while showing a hint of a rating gear, too, so if the favorite stumbles for some reason, he appears the most likely to take advantage, though let’s just not hold our breath on the former; second-best. 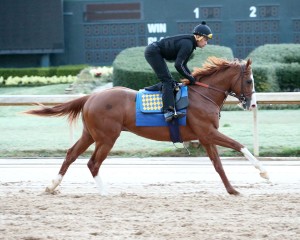 #9 Improbable (3-5): Potential 1-5 favorite is universally thought of as the top Derby contender at this point and starts off what Baffert hopes will be another OP stakes bonanza, as he’s got 2yo champ Game Winner ready for his seasonal debut in the second division today. Son of City Zip holds all the aces here, as he showed in his 3-for-3 juvenile campaign that he can be placed anywhere, and he won those starts in fast time while barely being asked, and that win in the Los Alamitos Futurity to end his season was a real beauty. Yes, this is just the starting point of what figures to be a huge campaign, but this is clearly the weaker of the two divisions, and he’d be favored over Game Winner, anyway, and there’s no one remotely like that colt in here; way, way too good for these.