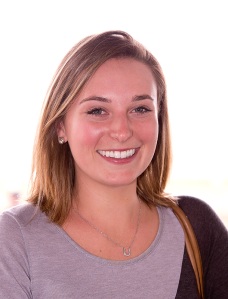 Gabby Gaudet grew up almost literally on the racetrack.  Her father, Eddie, trained horses in Maryland for more than 50 years; her mother, Linda, has saddled her own horses since 1996 and has 11 top-three finishes from 17 starts this year; and her sister Lacey started training in 2007. Until eighth grade, Linda home-schooled Lacey and Gabby in stable areas while helping her husband with training responsibilities.

It was only a matter of time before Gabby would join them in making a living at Maryland racetracks, but unlike the rest of her family, Gabby won’t be working on the backside.  Last week, the Maryland Jockey Club announced that Gaudet will replace Frank Carulli as the racing analyst at Laurel and Pimlico when he leaves at the end of the Pimlico spring meeting. Gaudet’s responsibilities will include blogging on the Laurel, Pimlico, and Preakness websites; handicapping on-air between races; and offering selections and news on Twitter.  For now, Gaudet will appear with Carulli on weekends; her full-time work will begin in September.

Gaudet, 22, was one of four finalists invited for a one-day, on-air audition last month.

“It was kind of make-or-break,” she said.  “We each had one day of live racing at Laurel.  I had Saturday, March 23rd; I had to pick the card and go on TV between races.”

“There was a stakes race that day, the Conniver, and I had to talk from the paddock for that one. It was a little nerve-wracking,” she admitted.

Nervous or not, Gaudet had a heck of a day, noted on Twitter by the Maryland Jockey Club’s vice-president of communications, Mike Gathagan.

Gabby Gaudet (@gabby_gaudet_) finishes with 5 W’s on the day. Boxing her picks would have meant cashing 7 times twitter.com/MDjockeyclub/s…

On April 3, Gathagan announced that Gaudet had the job.

“Gabby was the most well-rounded candidate with a tremendous upside,” said Maryland Jockey Club president Tom Chuckas in a press release.

Gaudet is currently a student at Towson University, studying mass communication and graphic design; after her trackside early education, she went to high school in Annapolis, where she played soccer and worked with her parents on weekends.  She got her license as an exercise rider at 16 and for several summers worked with her sister at Colonial Downs or Delaware Park.

“It was just the two of us, and we ran the barn the whole summer,” she said. “I got a lot of experience in the barn and the stresses that come with trying to train and run a horse.”

Back at college in Towson, she galloped horses for her parents and for trainer Tim Keefe, and she worked for Maryland Horse Radio. Last summer represented a turning point, when she went to Saratoga to write for the Saratoga Special.

“Getting that level of experience with Saratoga is so much different from Maryland,” she said. “I’d never been to Saratoga before, and I really got a new perspective.”

She’s looking forward to putting that Special experience to use in her new role as a writer for the tracks’ websites.

“It would be really beneficial for Maryland if people got to know some of the people that race here,” she said.  “There are some great stories around the racetrack that need to be brought out.

“If a jock or trainer has a really good week, I can go out and do quick interview, something light-hearted, human interest. The MJC does more stats, relating to the business end, so maybe I can show another side of racing. “

Gaudet will be a busy woman until she graduates, going to school during the week and working at the track on weekends. She observed ruefully that Preakness week is also the week of her final exams.

“It’s going to be a little hectic,” she said, in something of an understatement.

As Gaudet prepared for her audition, she observed and reached out to several women in racing, among them Katie Mikolay Gensler, race analyst for Fair Grounds and Keeneland; Joanne Jones of HRTV; and Jeannine Edwards, who has covered racing for ESPN.  She also watched NYRA analyst Andy Serling, and she was surprised to learn of a recent article posted at Horse Race Insider, in which a commenter advised the women auditioning for the job “to show a little cleavage,” adding, “if you don’t have any, forget it, you won’t get the job.” The article’s male author appeared to agree, albeit jokingly.

“That’s kind of an outdated remark,” Gaudet said.  “There are really, really successful women throughout the country in the business, and not only on TV. Rosie Napravnik is definitely not one to flash some cleavage; she’s a professional and a hard knocking woman.”

She added that she’d heard similar comments from other people, suggesting that she wear something low-cut on the air.

“Women definitely have to deal with that kind of stuff,” she went on, “but the only way to overcome those kinds of comments is by being well-prepared.”